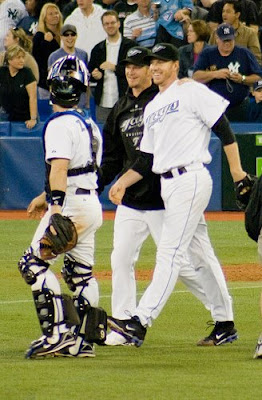 Tuesday, the Yankees make their way to the beautiful city of Toronto. They are playing a somewhat hot Blue Jays ball club that has won 7 of their last 10 games. The first games of the series should be quite an interesting match-up as this is the first game Burnett will be visiting his old ball club and will be pitching against his former teammate. Below is the scouting report for this upcoming game:

Yankees: Assuming the Yankees don't alter their rotation with Monday's off-day, Burnett will face his former team for the first time this season. The right-hander is coming off Wednesday night's no-decision to , in which Burnett allowed three runs over six innings. While not his best performance, Burnett did strike out eight Rays and was optimistic in his performance going forward.

Blue Jays: 's ace was dominating in his last effort, reeling off eight strong innings in a road victory over the Angels on Wednesday. Halladay blanked for seven frames before allowing one run. The right-hander scattered six hits and ended with six strikeouts, two walks and 13 outs induced via ground balls. Halladay has six wins in seven starts, marking the fastest he has reached that many victories in a season in his career. In 32 games against New York in his career, Halladay has gone 15-5 with a 2.86 ERA. He went 5-1 with a 2.40 ERA against the Yankees last season.


It should be a great series to watch, as these are two great pitchers that have the ability to be dominating. As for which team has the advantage, I probably would say the Jays have the edge as their offense has been more consistent than the Yankees, and well Halladay is just Halladay. We all know the type of command he has and his record of 5-1 with an ERA against the 2008 Yankees was surely not a fluke.
Posted by Al Leiter's Bullpen Catcher at 5:59 PM

Doc has the edge. AJ is not really a consistent pitcher BUT when he's on he's on. BUT the Blue Jays are no damn fluke, something which most people in the media are still not on board with yet. I hope you had a good time in Elmira (horseheads actually!)and an even better time at the Skydome. Toronto is a great town ,I hope that you enjoy yourself!

I think AJ and the Yankees will light up the Blue Jays. Yankees sweep and get themselves back in the AL East race.

Should be a good game between those 2 pitchers. The clear advantage is with Halladay.

Halladay has not lost in Toronto against the Yankees since March 31, 2003.

AJ will need to pitch a great game. He is no where near as consistent as Halladay, but AJ has the talent to shut down an offense.

I hope AJ can give us innings. We probably need him to go 7 innings. Halladay has not gone less than 7 IP in any start this year. He will be tough.

Looking forward to watching some great games. I hope you have a great time in Toronto and at the games.

There's no way Halladay loses to Burnett. He's going to teach him a lesson.

As you pointed, Doc owns the Yanks. He owned them in 2008 and he will own them again.

Man, y'all know that Jaybirds is partying up in style like that. I'm all about the Jays serious like. AJ is just so uptight and Doc is a white brotha that has soul.I think all y'all will keep it real but the Bluebirds will bust it up! All I can say is that Richmond walks like my homey Weezy Weeze from Harlem, another white brother. And Tallet, homeboy schooled the cheap ass As y'all. The Yanks will fight BUT we will bust it up soon the real, people be dancing in the street right quick. Can all y'all say the Big Prize in Twenty O NIne?