For those of you that don't know me, I am a pretty big fan of the left-fielder for the Oakland A's. I have been following the career of Matt Holliday for many years and he is someone that I would love to see in pinstripes.

While he has produced outstanding and consistent numbers for the past several years, there are many critics out there that believe Holliday's impressive stats are a reflection of the fact he has been playing at Coors field. Granted, there is an obvious advantage that a hitter has playing in Colorado, it is important to look closely at the numbers he has put up both at home and away from Coors.

In looking at Holliday's stats, he has hit over .300 in his four out of five seasons in the major leagues. His best season so far was in 2007 in which he hit .340 with 36 hrs and 137 RBI. Since it isn't his numbers that are debated, it is important to look at the comparison to games that were played at home to those played away. 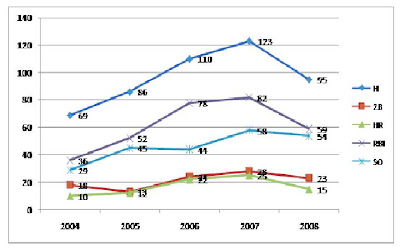 I made this chart (sorry it's not creative, but it's the best I could do). Anyhow, these are Holliday's stats for home games. I chose to include the number of strikeouts in both of these charts to see any further discrepancy that may exist between his lay at home and away. Below are his stats for games when he is away from Coors: 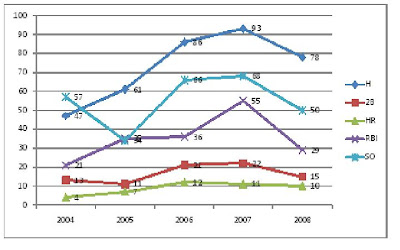 It may be hard to see, but there is a discrepancy in the number of homeruns that were hit at home and away. That is just something happens when you are a power hitter that is fortunate to play in a hitter friendly ballpark. When looking at the stats for the past five years (which may be hard to see), Holliday hit 10, 12, 22, 25, and 15 homeruns at Coors and 4, 7, 12, 11, and 10 homeruns away from Coors. When you further dissect that, the only vast in the number of homeruns really occurs during the 2006 and 2007 season in which he hit over 10 more homeruns at home than away.

However, when you look at his stats, I think it is important to note that while his numbers are inflated at Coors, the man is putting up some good number in general. His batting average away for the past two years was over .300 and his OPS is continuing to improve. In fact when you look at his stats away from home, his batting average, OBP, SLG, and OPS are all on an incline. Below is a chart of his stats away. 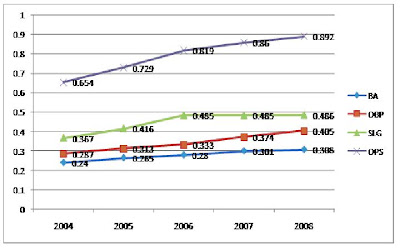 Regardless, it is an interesting debate. I will be the first to admit that there is an obvious discrepancy between the number at home and away from Coors. I do think it is unfair to judge him solely on that discrepancy because he has also had success when away from Coors. I think it will be interesting to see how well he does playing in Oakland- but to judge the results very carefully. He is playing in a new league and is still working on learning the pitchers.

Final Point: He is a Boras client so he is going to want the big bucks. I am not one to really seek after the big players, in fact I am the type of person that would rather see the little guy prevail and be successful. However, I have been a watching this guy closely for many years and now that free agency is approaching, I'd love to see him on our side.
Posted by Al Leiter's Bullpen Catcher at 8:48 PM

Let Boras get him the big bucks in Boston. I don't see Holliday being able to fit in in New York and being able to handle the NY media. Let him rot in Boston. Sorry Christina since you love him!

Holliday started off slow, but he's on pace for 25 hrs and 114 rbis which isn't exactly terrible.

I know that he'll want a lot of money but so will Damon. I would not offer Damon more than 2 years. Knowing the Yankees they'll give Damon 4 years, but that would be a mistake.

Financially it makes sense to pass on Nady, Damon, and Matsui. Just get Holliday instead. Maybe bring back Matsui if he accepts a low contract and is willing to accept a lesser role. Sorta like Ruben Sierra used to be.

Fortunately the Boston OF has no room for Holliday. He would hit great at that park. Holliday is the perfect LFer for the Mets too, but I don't see them going that route.

Holliday will still be 29 when the season ends. He's probably looking at least 6 years and Boras will start his demands higher. It will be interesting to see how things play out.

Oh and one other thing. Holliday could get traded before the trade deadline if the A's keep playing lousy.

Christine, I'll be brutally frank, Matt H is not playing in Coors Field/the Rockies anymore. That is the nexus of the argument against him. Unless Matt brings his stats up by a 100 points for the major categories, he will be signed for not such a princely sum. I'm not a Matt Holliday hater BUT there is no way he gets signed for mega bucks when there is a Jason Bay or possibly a Manny or even an Abreu out there on the free agent market . Quite frankly, he will be hitting the free agency market in a very bad time. I can see a Houston or a lesser team paying him some money just to bolster their franchise BUT the Yanks, Red Sox or Mets? All three of them will jump on Bay. In baseball, you're only as good as your last movie and if Holliday is only good, he ain't getting beaucoup bucks! Boston is a very savvy team, the model organization/franchise in baseball right now. They passed on Teix for what he wanted, there is arguably no way they seriously take Holliday...I just can't see it. Not if he is only a "good" player.


Ultimately, I have nothing against Holliday BUT he should have taken the Rockies offer, because he certainly willnot get mega money with an OK year AND sign with a contending team. He wants to be in NYC and get paid like the big boys? Not next year! And not with the market like it is either.....

@ Kyle, knowing Cashman they will make a play for Bay ,now that Damon and Matsui are coming off the books. Matt Holliday to the Yanks. i live in the NYC area, and I really don't hear any clamoring for Holliday quite honestly for the Yanks or the Mets.

@ Christina, I'm not a Holliday hater, but I tell it like it is. I really feel that Boras and Holliday should have taken the Rockies' deal, as Holliday could have been their face of the franchise for all time. It will be amusing if he signs with the Giants or another team that will pay him a princely sum rather than take a lesser sum for a contender. The market also has something to so with it. If the Yanks get Bay, I don't see Boston picking him up. Maybe and a big maybe to the Mets, because a lot of things might change for them by the end of the year.

Bruno- I understand what you are saying and I do agree with you to an extent. The market will be a big key to how much Holliday receives for his next contract, but I think if he hits .300 with the A's and hits 25+ hrs he will gt a stellar deal. It all depends on what the needs are for the teams.

I dont see Boras having a hard time finding a team to pay out the big bucks for him. I do myself realize though his stats were inflated by playing at Coors.

However, when you look at the new Yankee Stadium, balls are sure flying out of this park too, so Holliday should be right at home :) (Ok i am slightly biased here)

I value your input though Bruno. It will be interesting to see how it all plays out next season. The Yankees have some young guys in their farm, so ultimately they could survive without the bat of Holliday. I would be happy if he ended up with Toronto or even Tampa (though I highly doubt Tampa would pay big money). I just would like to see him on a team where I can see him play often. With the A's, they only play the Yankees a minimal amount of times.

@ Christina, yeah new Yankee Stadium is Coors Field east! But I think that the band box problem might be solved by next year. The ultimate thing with Matt H is that he might get big bucks if he is OK BUT from teams that are not in contention per se. Maybe Sabean in Frisco will give up some coin to add an itty bit of offense, which they so emphatically need. I don't see the Yanks doing it, they will make a beeline for Jason Bay. I think that Bay would be a great fit for that team,too. Like I said before, if the Mets don't make the playoffs Omar is gone and a new GM might make a splash by getting a Holliday so that might happen....