The trading deadline end tomorrow at 4pm. It will be interesting to see if Halladay is traded. Any ideas if he will be, and if so to where?

It appears as if he will be staying put in Toronto, which will be to the delight of many Jays fans. If he does stay its too bad they had to go through all this nonsense for the past few weeks. You have to wonder if Halladay was looking forward to possibly switching teams, especially after some of the heartbreaking losses the team has been encountering as of late.

A few things to note: 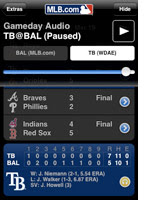 I'd guess they call Shelley up. AJax isn't ready. I think fans might be disappointed with him. People hype him to be a superstar, but he projects to be similar to Mike Cameron. Solid, but some fans will have higher hopes due to hype.


My surprise with Ortiz is that somehow he was never even implicated of PED use or anything until today. He might just have been the most obvious user in the game.

I too would be upset if Jeter or Rivera used steroids. I wouldn't be shocked with certain other Yankees, but some would disappoint me.

Tough loss tonight. Can't win them all I guess. Offense and our defense needs to play better on Friday.

I took the kind of steroids that make you talk a lot.

My best to Rascal.

Why the heck did the Yanks get Jerry Hairston, Jr.? Ugh!!!

V-Mart to the Red Sox-no surprise.

Rolen to the Reds.

Washburn to the Tigers

Peavy to the White Sox

Does Shelley know that Mark Melancon is your husband? He might want his bat back!

Shelley gets called up! Christina, please have Shelley get me tickets? Thanks!

Halladay NOT traded...Christina you was right! I'm happy about that. Didja hear what Kay said about the Yankee payroll. Hal told Cashman, that after Teixeira that was that! They got the lowly Pirates to pay Hinske's salary. In essence, the Yanks have very little payroll flexibility.

Most interesting trade was the Peavy one. I'd love to see how bad or how good he will be on the Palehose. Nice job by Kenny williams. After Peavey said no, he finally said yes...

Rolen for Encarnacion two minor leagures...very blah trade. The Jays will probably let Bautista take over third and let Encarnacion be DH. Encarnacion has been shitty this year both offensively and defensively, so this is a step down for the Jays.I don't even think that Brian Butterfield(their great infield /bench coach) can save this disaster! The two pitchers don't seem that bad though......

I dont get the Rolen trade, the Jays have clearly given up on their season. I wish they hadnt put Halladay through all this nonsense unless they were somewhat sure it would get done.

Did you see Shelley is on the team? Too bad he probably wont get used. Hes worked so hard to get where hes at and is a really nice guy.

I agree though Bruno, the Peavy deal is definitly the most interesting. It will be good to see how that works out for them.

The rolen trade was to save money for next year, I mean they are 13 games out. Hopefully the next GM, will be able to add at least two good RISP hitters and get rid of that lazy prima donna Rios!If they could use the money they save to get a Wynn, Abreu or a Damon next year....then things are shakin'. Otherwise with this current group, they are not going anywhere.AS great as Rolen was defensively and as a gamer, he has a tendency to get injured. He also didn't like the turf at the Skydome. Encarnacion supposedly has an upside BUT we'll see....

Problem with Shelly is that his minor league power hasn't really translated to the big league level. I like his enthusiasm BUT the Yankee are so filled with DHs and the like and Teix is a permanent fixture at first. Then again anyone should be a defensive replacement for Swisher! Even the Yankee Stadium dog catcher......

hahahah... so true about Swisher.... Looks like Shelley is headed back to AAA today. I wish they would have at least given him a chance to hit at least once.