I'm Back! It's sure been an exciting off-season

Brief recap of the 2009 off season acquisitions

Yankees Acquired:
Yankees Resigned
Payroll: Is (currently) slightly lower than the previous year, though the team still needs to sign a left fielder.

Positive: Solid 1-4 starters. Vazquez will give the Yankees that strong #4 starter that they did not have last year. Though I believe injuries could play a part in the 2010 season. Pettitte has an iffy elbow and I wonder about Burnett at times. Curtis Granderson should be an excellent addition to the team; with his contribution on the field and also off the field with his charitable work. Only think I wonder is how good of a #2 hitter he will be. That's the plan right? Unless Damon somehow signs back with the team.

Negative: Replacing Nick Johnson with Matsui? I think it's a decent move if Johnson stays healthy. Then again, Matsui also wasn't the healthiest individual either. At least Johnson provides you with the flexibility of playing first base when the Yankees want to give Teixiera a day off.

The Yankees appear to be in good shape. Especially when you compare them to the other team that plays in New York.

Also, I finished the Marty Appell book on Thurman Munson, and it was amazing.. I am going to write a review up on it and post it hopefully later tonight or tomorrow.
Posted by Al Leiter's Bullpen Catcher at 5:37 PM 4 comments:

The blog will be back in action after Christmas! Finally done with graduate school and my Christmas shopping is near complete. It has been an insane month or two. I hope everyone is doing well!

Have a great holiday everyone and try to stay warm :)
Posted by Al Leiter's Bullpen Catcher at 4:53 PM 6 comments: 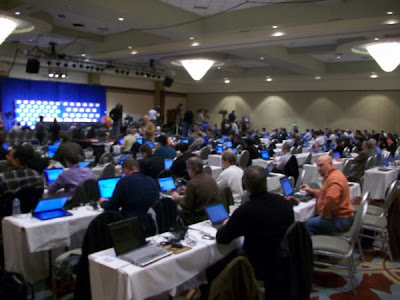 Well, the Winter Meetings have now come to a close and the Yankees have come home with a new player to add to their team. As part of a 3-way trade, the Yankees acquired Curtis Granderson from the Tigers in which the Yankees sent Austin Jackson and Phil Coke to Detroit and Ian Kennedy to Arizona. In addition, Detroit sent Edwin Jackson to Arizona and Max Scherzer and Daniel Schlerth were traded from Arizona to Detroit. It is an interesting trade, one which appears to have benefit the Yankees the most, though the true test will come during the season if we can see how well Granderson can hit lefties.

When it comes to Austin Jackson, I personally don't think hes ready, but a team like Detroit can take the chance in allowing him to grow in the majors. As a Yankee, I couldn't see Jackson being their everyday starting centerfielder just yet. He still needs to work on his plate discipline and start hitting more for power. The man does have speed though, something that Curtis Granderson also does have.

As for Arizona? Not sure how well they made out on this trade. Guess we will see how the young guys develop before a determination can really be accurately made.

Regardless, here are some cool pictures I stole (I am crediting!) from Vic Christopher's blog. Though I don't agree with how they run the club, he has put together a fun blog, so I highly suggest you check it out. There are some behind the scene shots at the lovely winter meetings, where the writers appeared to have stayed inside a convention centre/hotel for the entire week. Seems exciting.

Patriots Superbowl wins that were on display. Yuck. 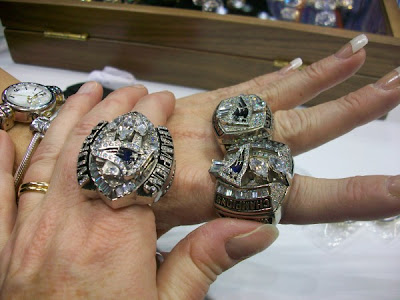 I guess this is where all the action took place 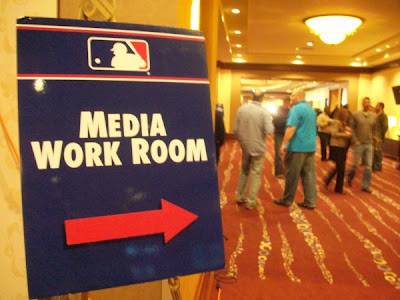 Here are some new products that were on display

This item is called the Swing Rite. It is a type of training aid that was designed to increase bat swing speed and improve hand-eye coordination 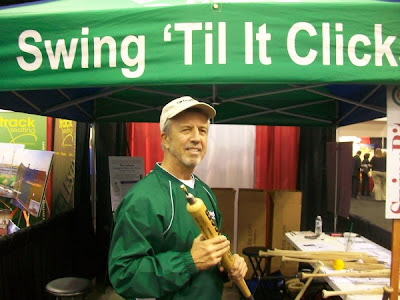 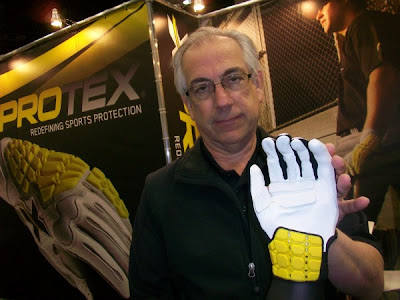 Some sort of underwater apparatus. Couldn't find anything about it online though. 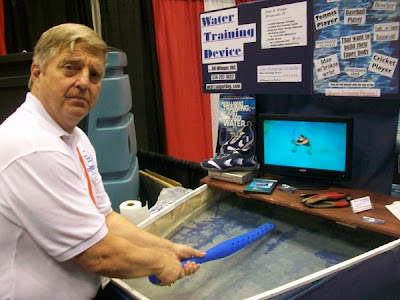 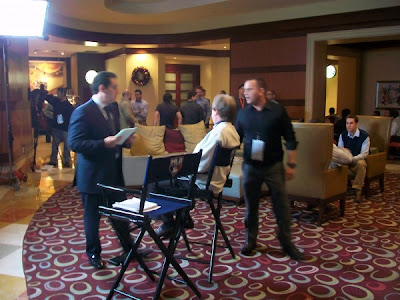 Today was the day of the Rule 5 draft. This is a rule that has been intact for many years and was implemented as a way to prevent teams from stock-piling too many free agents. Here is a blurb about the draft (from wikipedia) for those of you who are not familiar with it:

As in the amateur draft, the selection order of the teams is based on each team's win-loss record from the prior regular season, each round starting with the team with the worst record and proceeding in order to the team with the best record. Any player selected under Rule 5 is immediately added to his new team's 40-man roster; thus, teams who do not have an available roster spot may not participate in the Rule 5 draft. Players who are not currently on their team's 40-man roster are eligible to be selected in the Rule 5 draft, but only after a standard exemption period has elapsed. See Selection eligibility below.

The reason I am rambling is because the Yankees decided to not place Zach Kroenke on their 40 man roster, which would have protected him from being selected as part of this draft. He was picked up by the D'Backs today; a selection that I should be surprised about as Kroenke has shown he has talent that is worthy of that selection. Hes a solid lefty with a decent fastball and a slider. As I embarked on my travels to AAA games this year, I found myself drawn to this play. I am disappointed he is no longer a Yankee and wish him well on his new journey. It was obvious the Yankees didn't have much interest in him and he will hopefully get more playing time now that hes on a different team.
Posted by Al Leiter's Bullpen Catcher at 5:47 PM 6 comments:

I hope Al Leiter doesn't threaten to take down my blog....

It looks as if the Yankees are trying to take down their own fans. Over at The Yankee Universe blog, they posted an entry that stated they were contacted by someone to change the URL of their blog. The letter on their website states:

"Your unauthorized uses of the MLB Marks on the Website and in the Domain Name are likely to cause confusion, mistake and deception as to the existence of an affiliation, connection or association between your business on the one hand, and MLBAM, and/or other applicable MLB Entities on the other, and constitute trademark infringement, dilution and unfair competition in violation of federal and state law.

Accordingly, demand is hereby made that you immediately cease and desist from using the YANKEE UNIVERSE name and the Logo, any other Yankees Mark and any other MLB Mark in and as the name of your Website, to promote the Website, to seek advertising any other commercial opportunities, in and as the Domain Name, and in any other manner that would cause consumer confusion, dilution of the MLB Marks, or imply any sponsorship or endorsement of your Website or its contents by any MLB Entity"

I guess this isn't surprising, though I think it is lame they are going after a group of guys who clearly are not profiting form their website. They write about the team they love. Why do the Yankees and MLB have to bull everyone?

Al Leiter you cant take away my blog. You or your bullpen catcher. Sorry. Ill trademark it myself if I have to!

Oh where oh where will Roy Halladay go?

The great Roy Halladay (HAL-a day not HOL-i-day.. I hate how people mispronounce his name) has announced to the world that he will not engage in trade talks during the regular season.

With that, Toronto has to make a decision to trade him before Spring Training or keep him on the team for the entire season. This was the best -and most obvious- move for Hallday, given the distractions he faced last year around the trade deadline when he was uncertain as to which team he was going to be on.

If I am the Blue Jays, I would look for a team that's willing to give me some decent young players in exchange for Halladay before camp meets in February. I doubt the Jays are going to get as much in return now (as he would have gotten during the trade deadline) but they know they don't have a shot at having him past 2010 and they need to start developing the team for the future. In trading a huge star like Halladay, they should be able to acquire some decent prospect that will be able to help them now and/or eventually down the road.

At this stage in the game this has to be Toronto's approach. They have to realize that there is no way to compete with the Yankees and Red Sox payroll. It must now be able developing young players and putting a lot into the draft. They have done well with that over the years in getting some decent pitchers, but the key now is keeping these guys healthy and continuing to make smart decisions during the draft. In addition, they need to start spending their money wisely when it comes to free agents. While the Vernon Wells deal looked good in the beginning, it has ended up being a huge mistake; one that is taking up a huge part of their payroll and hindering them from signing other key free agents.

If I am the Jays, player development is key along with trading away the great Roy Halladay. I will be very bummed with this happens (and inconsolable if he goes to the Red Sox) but for the better of the organization, it needs to happen. I personally hope he goes to the Phillies.
Posted by Al Leiter's Bullpen Catcher at 11:44 AM 7 comments: