Just wanted to make a quick mention as to how Matt Holliday has been hitting this past month. While he started off slow (which led to many people doubting his ability to hit the baseball outside of Coors) he has heated up immensely, raising his batting average to .291. He had another good outing today going 2-3 with a double, BB, and RBI. So far for the season he has 8 HR's, 37 RBIS, 56H and 26 walks. I can't see the A's holding onto him much after the All-Star break. So the question is, where does he end up this year? Will people give him a chance or is the notion that he can only hit in Coors going to follow him for the rest of the season? 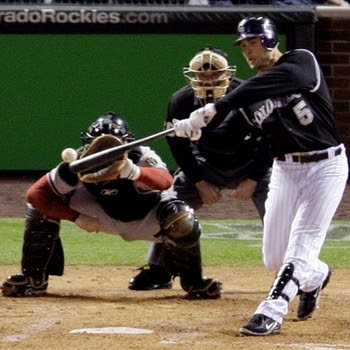 Posted by Al Leiter's Bullpen Catcher at 12:41 AM

He's been hitting a lot better lately. He had a slow April and then he started to hit in May. He's really been on fire the last couple weeks.

I would think a lot of teams would like him. Mets come to mind, but it would them a lot.

Braves, Giants, Cardinals and maybe even the Reds (I doubt it, but things could change if they're just 1.5 games out of the WC as the deadline nears like they are now.)

It depends if Beane can get better than the 1st round draft picks. The Mets would have to give up too much to get him AND quite frankly they have too many problems that no one player can solve. Holliday would be traded to a team that is very close. It's hard to see if he is the player he was in the Mile High City BUT one team might bite......