The Day that Sports Radio Died

OK, perhaps saying sports radio "died" is an overstatement, but the end of the Mike and the Mad Dog radio show was a huge blow to many sports fans who often found themselves glued to the radio (or TV in my case) listening to the crazy antics that often occurred between the hours of 1-6:30 on weekdays.

It was a show that you either loved or hated. It was an instance where even if you hated the guys, you still found yourself glued to the TV to hear what thy had to say. I can think of several instances in which I was yelling at the TV in complete disagreement to what they had to say. I can also think of the times I would be hysterically laughing at some of the stupid things that would come out of their mouths (does anyone remember Chris' tirade about "SEATTLLEEEE" or R.A Dickey").

There was also that time in which I went to the YES Studios in Stamford as part of a project for school (thanks to Chris, nice guy). As part of this project, I had to observe the different duties that were part of this job, which included the production of the Mike and the Mad Dog show and putting film together for different shows. I learned so much from this outing and it made me see how detailed of a process it is to work in the field of television. 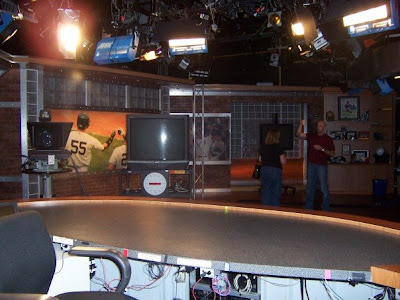 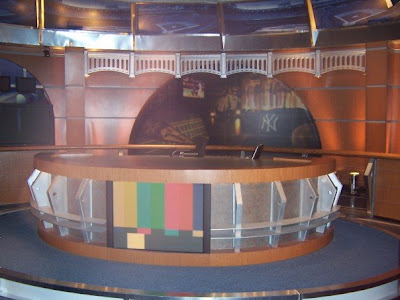 (Some pics I took of the old YES Network Studio in Stamford.
It is completely different now that HD has kicked in).
Regardless, they were a mainstay for New Yorkers and they were extremely successful at what they did. Now, Mike Francesa, all alone in his solo-act has turned into being quite a joke. His persistence about Joba being placed in the bullpen is getting tiresome and his love for Arroyo is befuddling. I can't say much about Chris' radio show, as I do not have satellite radio and I have no interest in listening to him alone.

I am curious as to what Mike does when he embarks on his month long journey to the beautiful area of Saratoga, New York. If for some reason I run into him while I am visiting the ponies, I am not sure I would be able to contain myself in telling him he is a fool about this Jobber situation. Or maybe I will advocate 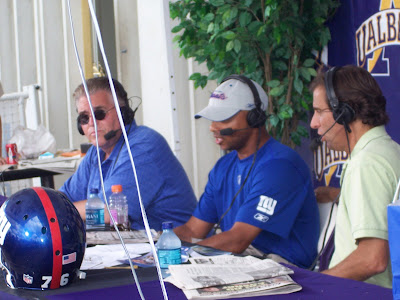 Mike and Chris in Albany, which ended up being their last remote together
Posted by Al Leiter's Bullpen Catcher at 8:47 PM

Awww, RIP Mike and the Mad Dog. I used to love listening to their opening during my lunch break. Was great radio. Since they broke up, I rarely listen to Mike anymore and even though I have satellite radio, I never listen to Mad Dog. Sometimes I'll even flip over to Colin Cowherd on 1050 ESPN Radio at 1 pm instead of Mike. I never really liked Cowherd in the past but his show is not that bad.

Mike needs to really add a co-host to his show that was talked about when him and Chris broke up. Very, very curious to see what will happen now that it's the summer and he takes a lot of vacation time. Maybe Joe and Evan will do the afternoons and Kim and someone else will do mid-day or something.

Oh, and I hope you win a lot on the ponies!

Quite frankly, Mike is boring without the Dog. Yes, Christina he's obsessed with JOba in the pen, been there done that a million times with him. And his Arroyo obsession is stupid as well. Remember Mike is the one that pushed the Mets to get Piazza. How well did that work out? I find myself listening to Michael Kay instead actually when I can.......

Dont you love having Leiter and Coney in the booth? I feel like I am in heaven! What a duo!

I definitely miss that show. Mike is no where near as good without Mad Dog.

Mike would have gone off about Joba to the pen and Rivera being done (even though it's only ties that seem to trouble him), but the Yankees got extremely lucky tonight.

Mike could certainly use a side kick, but I think he likes having the show to himself.

Mike and Christina sounds good. However, Mike wouldnt last too long after I knock him in the head after hearing the Jobber nonsense non-stop.