I was looking through some of my old photos when I came across this one in particular. Before you guys look at it, I have to explain the origin of how this happened. I think it was taken five years ago when I was in Tampa for Spring Training. I had just gotten a new Kodak camera that I had no idea how to use. It was my first digital camera which was quite exciting.

Anyhow, apparently when you take the picture, you had to leave it there for a second before moving it. Me, being the uneducated photographer had no clue that this had to be done. When this player approached me and a group of others that were around, I was so excited to get an autograph. It was actually a cool experience because I handed him a ball that one of the ball boys gave me, which was really dirty. The player looked at me and said to a guy, get this girl a better ball. Eventually a guy came back out with a ball, and this player signed it for me...

I was so excited, that I wanted to get a picture of him signing the ball. Well, my photography skills were put into place and here is the resulting photo. Please note, I was aiming for his head, not his crotch.... 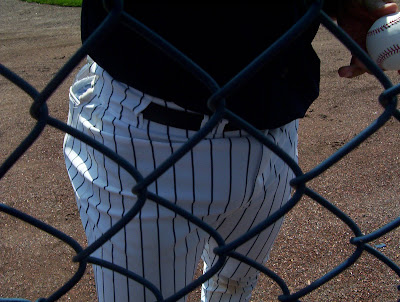 So... any guesses as to who this nice player is? He was also the very first autograph i received! The beginning of my very large collection.

Oh, and sure u weren't aiming for his crotch. ;)

Posada was my 1st guess. Then I thought maybe A-Rod.

I was gonna come up with something campy like Glenallen Hill OR Mariano Duncan BUT alas wrong time period. If it ain't Posada , it's Cano then?

I have no idea. All I know is that is some Yankees' crotch.

Good job guys, it was posada. Sorry to have bored u with crotch pictures but I saw the picture and had to post it. I was so pissed off when the camera did that.