Trip to Scranton! Yanks vs. Pawtucket 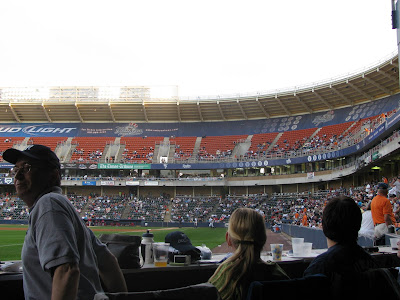 It has been a long two days, if I must say so. On Sunday, I made the nearly 3.5 hour road trip (each way) to Scranton, PA to check out the Scranton Yankees take on the Pawtucket Red Sox. It was a long journey getting to the stadium, but it was well worth it as Pete was having his LoHud Yankees Blog outing in the left field pavilion in which over 80 people had shown up to root on the Yanks.

It was a double header affair, which for some reason began at 5:05 PM. I was thrown off by that as I would have thought an earlier start would have made more sense. Despite the later start, the weather was beautiful and it was great seeing this minor league ballpark. Since I typically end up going to games by myself (sad I know, but no one ever wants to make the long trips with me to see a baseball game), this was exciting because I was able to meet up with some amazing people who share that same passion for the game of baseball.

I have to say, it was intimidating at first, as I really didn't know anyone there and I began reverting back to my shy self in life. Thanks to Rebecca (whom I met a month or so ago at the Yankee game), we were able to reconnect and discuss her love of Jesus Montero and my love of Mark Melancon. This girl knows her baseball and really made me feel not so lonely at this event. She even introduced me to her friend Brent, who is such a nice guy and is even going to be a teacher, which makes him 100x cooler in my biased-teacher eyes.

Major props also to Chad Jennings, who stopped by during the first game to hang out with us in the left-field pavilion. He is a nice guy and is great at what he does. If you haven't read his blog or this amazing article he wrote on Shelley Duncan, I recommend you do so. I also have to mention Ashley who is an intern for the SWB Yankees and could haven't been nicer. Since I had been worried about another rainout at Scranton, she was helpful in giving me the conditions of the field the night before. I felt bad for bothering her but she was great about it and it was ironic to meet her in person. Thanks again, Ashley!

All in all, it was a great time despite the Yankees dropping the first game 5-3 against some Red Sox pitcher that none of us had heard of. Shelley hit a HR in this game and also a grand slam in the second game. Yankees won that game by a score of 6-1. I also must note that Brent, Rebecca and I started a Yankee role call during the second game which was pretty eventful. Shelley of course gave us the most comical pose, and there were only 2 guys that didn't respond to us (Miranda and Curtis). I wish I was good with names, but to all those I met at the outing, it was great seeing you all there. Some people even knew of my blog, which was pretty cool.

The trip to Scranton is definitely worth the drive, even if you are in NYC (which I think is only 2 hours right?) Make the trip, you wont be disappointed! As for the outing, many thanks to Ron, Pete, and the Yankees for the free stuff. Through donations and also the raffle, the LoHudders contributed nearly 800 dollars for the Cody Miley Scholarship fund which was amazing! 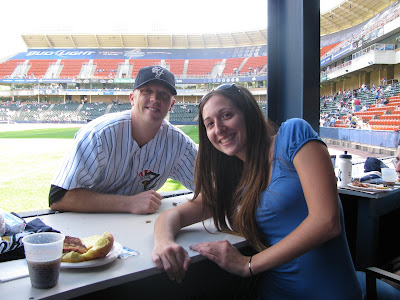 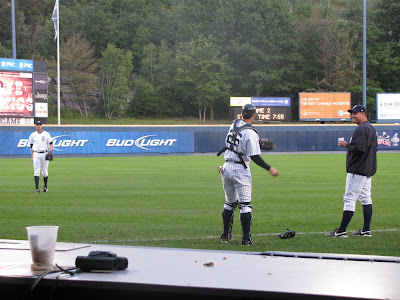 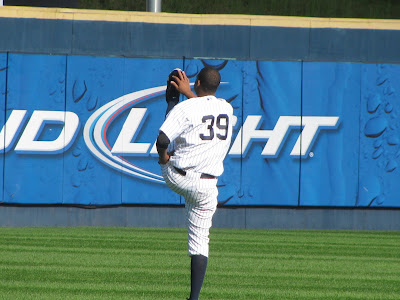 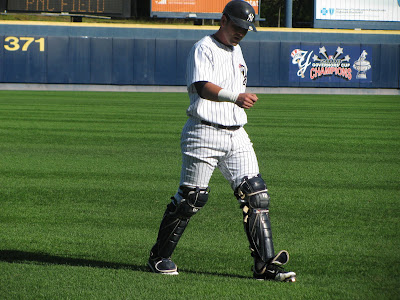 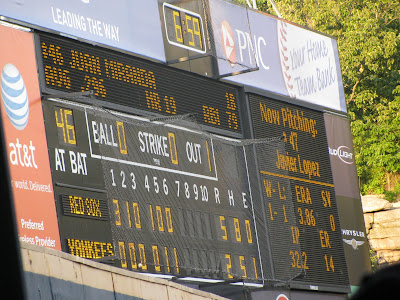 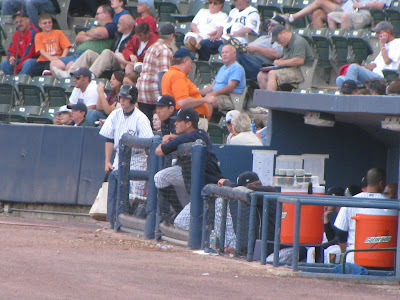 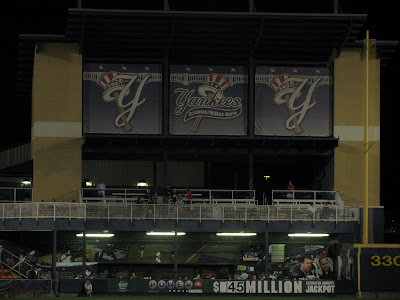 Posted by Al Leiter's Bullpen Catcher at 11:11 AM

Rebecca needs to fix her tooth.

I'm glad you had a great time!

Great pics also! Looks like a nice ballpark and sounds like a lot of fun. I will have to go check out the park sometime.

Also, just wanted to mention that Shelley Duncan was named MVP of the International League and Austin Jackson was named Rookie of the Year.

hey i went to the outing as well and i myself had to leave early for my never ending trip back to nyc. I borrowed your pen for Shelley Duncan's autograph lol! But it was a great game. Glad to know there are women out there who are big time baseball fanatics.

heyy! i remember you, lol. Glad you got Shelley's auto, such a good guy. It was nice meeting you too. I had such a great time at this game. Between meeting all of the people and doing the roll call, it couldnt have been a better night.

now i wish i would have went this year...

To make you feel better, Curtis is deaf so I'm sure he didn't intentionally spite you guys when you were doing role call =)