Did anyone see the "catch" Clint Barnes of the Rockies made against the Cardinals on Sunday?

Setting the stage: The Rockies are leading the Cardinals by a score of 4-3 in the 9th inning. With a man on first and third with one out, Ryan Ludwick hit a blooper to CF. Barners appeared to make the diving grab, according to the clip (which can be found here), which shows him diving for it and rolling over to the ground.

However, when you look at the photos of the play (found here), you can clearly see the ball had dropped, but as Barnes is on the ground, he swoops up the ball and acts as if he had indeed caught the ball. Without the photos, nobody would have known. Not only was the batter called out, but Pujols was too far off of first and was called out. Game over, Rockies win. 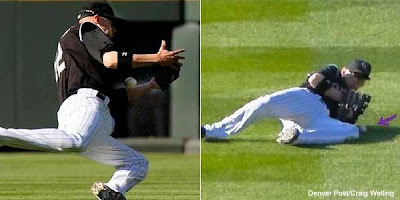