A rookie is defined as "a player has to have had fewer than 130 at bats or 50 innings in the majors, or 45 days on the active rosters of major league clubs (excluding time on the disabled list or any time after rosters are expanded on September 1st), in previous seasons."

In baseball, the tradition to honor these rookies is to have them dress in some sort of costume; something that starts once they leave the ballpark, are on board the plane, and eventually out to dinner with a veteran player. I read online that the traditional hazing procedure for rookies in football is taping the players to a goalpost and then dousing them with water. Sounds great.

Anyhow, I thought it would be fun to look at some past rookie hazings in baseball. First lets look at what the Yankees have done: 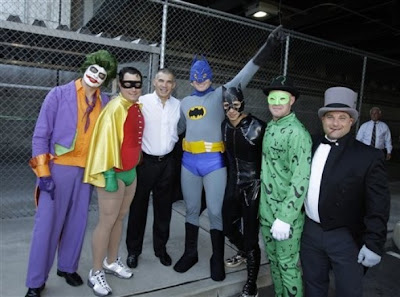 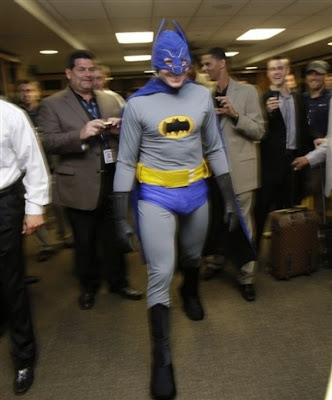 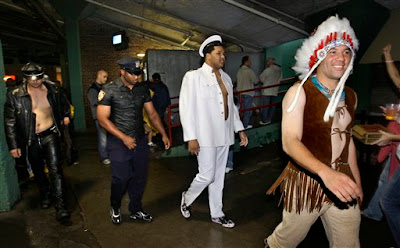 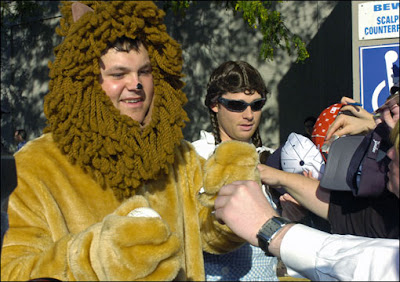 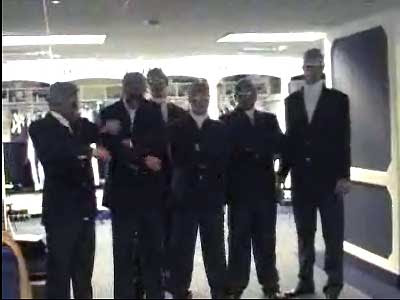 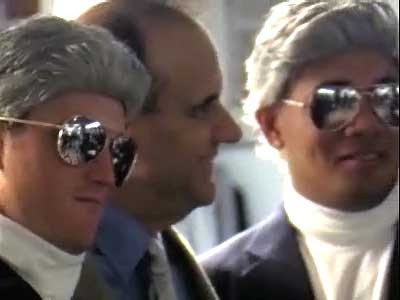 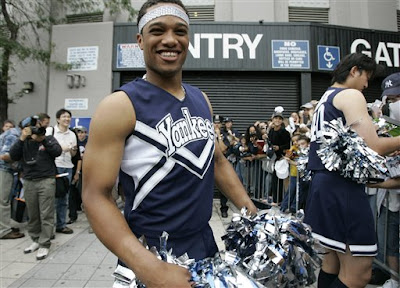 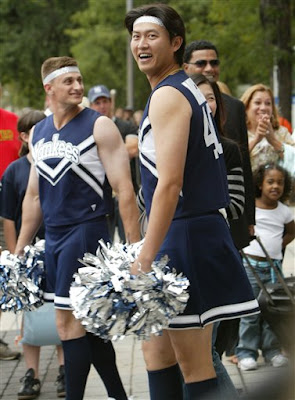 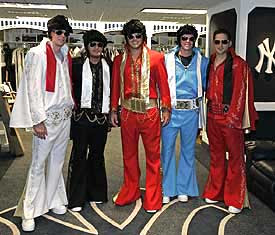 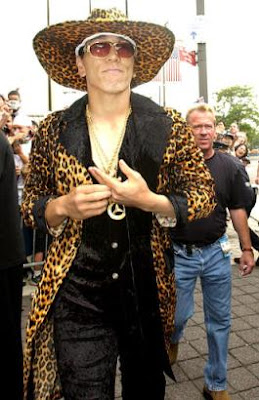 Notables from other teams: 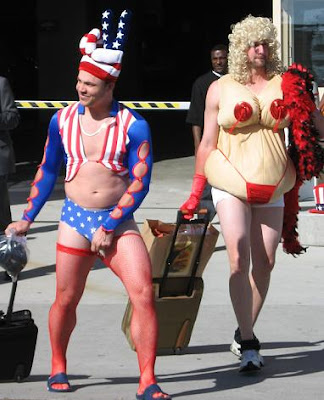 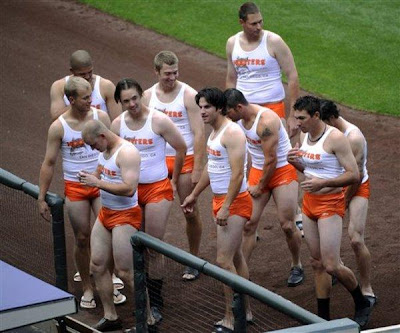 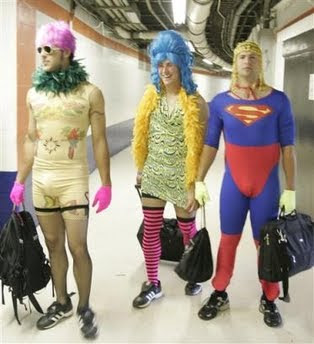 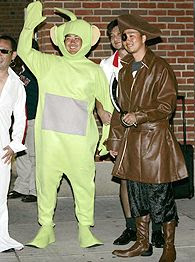 Damn. The last thing I needed to see was Chien-Ming Wang in a cheerleader's outfit. Thanks Chris!

no problem eye! gonna look for some Jays

The Batman costumes are too easy on this year's rookies. Cano and wang look so adorable as cheerleaders..they look almost too happy...like they cross dress in real life,too!

Bruno, I wonder if ARod hit on Cano and Wang?

He likes masculine androgyny in his "women"

eye, do the Jays not do rookie hazings? It seems like they only have their rookies carry around a pink backpack all season

Lauren are you near the Staten Island Mall? I love SI! Anyway, is Kate Hudson really manly? Madonna? She looks like an old Tranman! He dated one of the ragged Real Housewifes of Manhattan...yuck. Cynthia was a cute Greek Girl though.
Lauren I remember the kooky gay rumors about Arod and Jeter. You really think Kate is a beard? Cano looks like his type though.......

I do think Jeter is bisexual. Not that there's anything wrong with that. More power to him.

I don't think Alex is gay, but he may be latent. Again, nothing wrong with that, either.

Alex is attracted to masculine women. Remember the stripper in Toronto who had bulging biceps and deltoids. There are bikini shots of Cynthia and she's also muscular. Alex also had a big crush on Canseco's wife, who was VERY muscular. Then there's Madonna who has a grotesque muscular/vascular build. As for Kate Hudson, well, she's flat chested and looks like a tom-boy. You add it up and Alex likes women who have manly looks.

lol Lauren.. so true about A-Rod

Lauren you really think Jeter is bi? I know stories about him and they only involve girls not boys. There are shocking multiple stories about Jeter's activities with women that are not really public knowledge or on Page 6 BTW.
I'm very shocked that this is becoming a gossip site! I'm not a Yankee fan so I would be giddy in laughing at the Jeter-Arod couple,BUT I don't see it. And from what I've heard Jeter is wanton in his lust for women,even though he seems so sweet.......and he doesn't have heavy duty bi-sexual, gay rumors swirling around him like Maria Sharapova BTW. That's another kettle of fish altogether.Didn't someone say something about him and Tyson Beckford ?

Arod has daddy issues, so he might have been with a sugar daddy as a bottom somewhere.Arod looks beyond metrosxual to me...more like homosexual! yeah, it's all good if they are trysexual,bisexual or gay BUT the thought of him together with jeter is hysterical.

Nothing wrong with gossip, especially on an off day. Plus, when you sit in the stands, people all around you will pipe up with gossip, during the game.


I don't think ARod is gay, just that he likes muscular women and currently a tom-boy.

Jeter is a different. Yes, I know he's a horn dog. At the same time, there as been some strong indications that he also likes men.

There are plenty of bisexual men who have voracious appetites, even when they primary date women. It's almost like how guys prefer blondes, but won't exclude an appealing brunette.

So what "shocking" stories have you hear about Jeter?

Jeter is good in the sense that he keeps his rendezvous to himself, for the most part anyhow.

A-Rod and his choice of women are interesting, as he tends to go for the manly types. But as long as he is happy, then so be it. I dont care much for that Kate Hudson though,

As for dirty players, you dont have to look far. Just see Melky and Cabrera. Soo bad.

Whoops, I meant Melky and Cano...

@ Christina, you are right ,Jeter's smarter about what he does about town. He goes about his business in a very discreet way. I know someone who met Derek at a bar and he was totally cool.That someone is a dude and Jeter didn't hit on him. Arod is more of a starf%&ker type and attention whore. As a Blue Jay Fan, you know that I can't stand 'im from that shouting incident from two years back.

@ Lauren, you want dirt? here's a tidbit. Jeter met a waitress at a restaurant and the two got along with one another. Jeter wanted to have sex with her in the restaurant bathroom BUT didn't have a condom, so he asked around for one. He's very mindful that boy,BUT nothing happened because he couldn't find somebody with one.

Another thing ,he's dated a bunch of starlets and supposedly he gave the big H ,yeah Herpes, to at least two of them. One a very exotic girl of half Latino extraction and the other a reported bi-sexual who is using a pop star as a beard! someone should tell Jeter that condoms don't spread the transmission of Herpes! He should be taking his Valtrex ,too.

Lauren, I expect to hear all the dirt about the famous people who hang round the Staten Island Mall,now right? Or maybe even the Royal Crown Bakery...their bread is so damn good,isn't ?

What about my man Roy Halladay? He as clean as I hope he is?

The bi-sexual who is using a pop star as a beard, would that be Jessica Biel?

Check out these pics of Jessica with her lover, while acting has whatz his name's beard.

Btw, where did ya get all the dirt on Jeter?

Doc is a true blue Mormon. Say what you want about the LSD/LDS people, they are so hard working and committed to their families. Yes, there are bad apples in the bunch BUT Roy ain't one of them. His wife was happy they stayed in Toronto. Halladay is a hard worker and he is so straight laced. It's all good with him......

Lauren, how did you hear the dirt on Vito Fosella? At the SI Mall? at the Royal Crown Bakery?LOL I know a lot of people, so I hear things. I don't give up sources BTW except for one. I ran into a very famous gossip columnist one time and he spilled the beans on some people. It was funny when Kelly McGillis came out, because I knew about her activites for years. Jodie Foster AND Whitney Houston showed up at one of her films and had a catfight with each other over her! at the time, Houston was sleeping with McGillis BTW! Heard that from a very reputable source who worked on the film. You hear shit about supposedly straight girls like Anne Hathaway(yeah,she plays for both teams) and the like BUT that was the most comical lesbo story I'd ever had heard. Jodie Foster I knew about from friends of mine r saw her in Manhattan with her companion, where I used to work.

Like I said about Jeter, he's not a Sharapova where you used to see her everywhere with Camilla Belle and they were vacationing together etc so on. That's an instance where Sharapova who has been linked to both GUYS and GIRLS was seen in NYC ,Europe exclusively with one person,Camilla Belle. well, she was also spotted with a male "friend",too for awhile at the same time, another famous tennis player. She has a boyfriend now and is keeping it under wraps....As far as I know Jeter hasn't been seen at gay bars or been with guys. I haven't heard any gay dirt on him at all and I hear a lotta shit from people.


Lauren you didn't guess who the other actress was? Take a shot.......

wow Bruno, you sure have all the gossip. Glad to hear Halladay is a good soul. Very rare in baseball, or any sport for that matter.