Interesting game tonight, though I can't say I am surprised, considering the fact Girardi has been overmanaging the bullpen for the longest time, the most recent time being the game on Saturday in which he went through 7 relievers.

I still cant figure out why he took Roberston out of the game. This guy has looked stellar out of the pen this year for the Yankees and he was coasting through the 11th inning. Out of the blue, Girardi takes Roberston out with 2 outs in the game and replaces him with the ever-so shaky Alfredo Aceves. We all know the ending of the game but maybe someone needs to tell Joe that despite the fact he is refused to as "Ace", Aceves is nothing close to being an Ace and there was no purpose for him to be pitching in that game in the 11th inning.

Lastly, I could resist but to put this picture up. I can't imagine what Jeter's reaction was after A-Rod gave him a little nudge. This was more than a pat on the butt too. 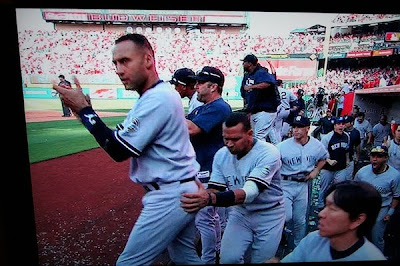 Yo, I thought I was the only one who noticed that. A-Rod totally grabbed Jeter's ass. And it wasn't some congrats ass slap or anything. It looked like he was a drunk guy in a bar feeling up some drunk freshman.

I had to do a double take when I saw him do that.

The best is Jeter's reaction, like what the hell was that...

That stat book needs to go. That's embarrassing too. You don't see Scioscia doing things like that.

Sometimes a manager needs to watch a game with his eyes and have a feel for the game. Keep a pitcher in that is dominating.

I figured we'd lose sooner or later due to his over managing.

Aceves nearly lost game 2 also. It took an A-Rod homer to bail us out.

Other insane decisions were his constant changing pitchers after 1/3 of an inning and his substitutions. It got to the point where we had lost Matsui and Damon's bat. We had a pitcher's bat in the lineup.

and Arod's an interesting character.

I don't know as long as he keeps on being clutch this year he can do whatever. That was definitely more than a slap though

I told you guys (especially bruno) that ARod was latent.

You don't date one masculine woman after another without having an occasional attraction to guys.

Lauren, a friend of mine saw Kate Hudson recently and reported: she doesn't look like any dude I know! She's all woman. So I don't agree with your assessment. Madge looks like a trannie, but Cynthia was not that butch and neither is Jocelyn the escort who he was dating /having an affair with. BTW you failed to note that Jeter reacted adversely at Aroid's actions. Trust me, I have dirt on a lot of Yankee players and Jeter's dirt is all girl related. My favorite story is about I Yankee I absolutely despise. He pretends to be into the team spirit, in reality he's a money loving douchebag who is putting on a brave face. It's a story that seems like it's out of a Farrelly Bros movie. Great story, tops my one on Jeter and the waitress.......

Stop blaming Girardi Yankee fans. The Yanks suck with RISP. They were bad in Game 2 in that regard and even worse in Game 2. If swisher and Cano could hit a ball , THEN the whole Girardi acts like La Russa point is moot.The game was lost early in the game when they didn't capitalize with men on base. Nuff said.

Without being sabermetric, a tie game beyond the 9th in almost any game results in a home win(in my viewing experience and I've watched baseball since the early 70s). Girardi could have left Robertson in, what next? The Yanks have to hit the next time up, maybe NOT another effing home run maybe a solid double with 2 men on, right? Probably not. Then who does he bring in? Robertson again? BTW, Scioscia used 6 bullpen guys. Remember the dolts like MIked UP Francesa telling us how bad the Angel bullpen was?

kate hudson doen't look like a dude. no. But she does come off as tom-boy.

I have to disagree about the other women. women how are ripped with bulging deltoids and v-backs are masculine, even if they have long hair.

I know butches and being muscular with long hair doesn't make one a butch or even masculine. Thta is a very debatable trait. Maybe Gayrod is attracted to athletic women. a Kate is a tomboy? I disagree very much with that one. Jodie Foster was a tomboy and is now a lesbian! I never got a tomboy/latent bulldyke vibe from Kate..ever. She's not a pretty or cute as Minka Kelly is,but she's not bad. She's not as cute as Goldie Hawn was at her age was. BUT she has a cool ethnic background: Italian, Jewish and WASP, a very nice mix if you ask me. and I never have heard any Staten Island gossip yet from a certain someone from SI yet. I just heard something about a star who is from the SI!

Scioscia has made his own mistakes in this series along with his players. as much as I admire Mike S and his gutty gritty Angels, they reacted adversely to the cold in NYC. They did an excellent job in the second game BUT that game was giftwrapped to the Angels and they blew it.

The stripper A-Rod hooked up with looked like a man with a wig on; definitly the masculine type.

As for baseball, yes the Yankees stunk with RISP and that didnt help them at all. But when it came down to the score being tied with Tex and Arod up the following inning, you have to leave Robertson in there. That cost them the game, regardless of the number of players they left on. The Angels also screwed up on the basepaths themselves last night.

Wow, that's one focused ass-grab. A-Rod really is locked in.