An A-Bomb and a Tex Message

Another walk-off for the Yankees. It appears as if the new Yankee stadium has become a huge home field advantage for this team. You really never feel like they are out of it, despite the fact they are down going into the 9th inning.

If I have to say so myself, the key acquisition this off-season was the signing of Mark Teixiera. What a difference he has made this year, more specifically in protecting A-Rod which gave them a huge 3-4 punch. Then add CC and A.J on top of that and you have quite the rotation. I guess money has the potential to buy championships, of course when spent correctly and when everyone plays to their capability.

Looking beyond that, the Swisher acquisition was pretty good too. He really has brought some spunk to the team and a different attitude than when he was a white Sox. I hadn't heard too many good things about him, except how he could be quite a selfish guy when not playing full-time. I guess that wasn't really much of an issue when the Nady injury went down. It pretty much gave Swish a full-time gig at RF. 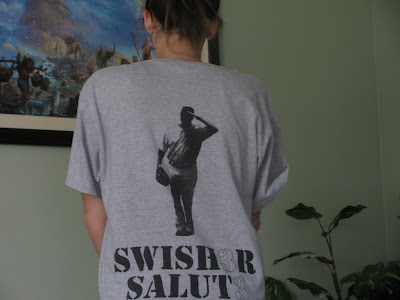 My Swisher t-shirt which was designed by the great Bald Vinny. Great shirt, and if it wasn't so big, I would probably wear it out more often.
Posted by Al Leiter's Bullpen Catcher at 3:02 PM

I agree that the new Yankee stadium is becoming a big time home field advantage.

Teixeira has been amazing. He won it with the homer, but he also had 2 great defensive plays the top of the 11th.

I think money helps, but it needs to be spent wisely. The Yankees had more expensive teams in the past that were flawed teams.

The twins actually are owned by a family that makes the Steinbrenners look poor. They have the money, but just don't spend it.

Swisher has been good. He made a key play earlier in game 2 with the help of Gomez that saved what might have become a big inning for the Twins.

One other thing about Game 2 was the missed call by that ump with Mauer hitting. I have no idea how he missed it. He was in perfect position to make a call and he was less than 20 feet from the play.

@Kyle, the problem with money is that it helps you be competitive. The Tigers tied for first place and spent 130 mill. The Red Sox spent 125 mill, the Yanks an obscene 200 mill and the Twins are the sole team that doesn't spend much money in the Al and ended up in the playoffs. I'm much older than a lot of the post 96 fans. when the Yanks won they were number 2 in payroll to the Orioles. If money being spent wisely is an issue ;then institute a payroll cap at where the luxury tax is. If the Yanks were held back they couldn't get a CC, AJ and a Teix at the same time. The money also allows the Yanks to take on a fiasco like Igawa! what team could afford to hide that guy in the minors. They spent less than a half billion dollars to get CC,AJ, Teix. There was no wise drafting involved,only buying players. The Yankees have consistently outspent their opponents in the american league by 50 mill dollars a year. This year the closest team in salary was the Tigers at something like 130 million. Imagine who the Tigers could have added if they had 70 mill extra to burn...try CC,AJ and Teix!

I'll give Swisher credit BUT I think he will make a big gaffe in the field somewhere. Gomez helped out with his stupidity BUT what can you say?

The Mauer call was a joke. I can only say that the Twins lucked out with Inge not being awarded a base in that hit by a pitch scenario and this came back to bite them in the butt. The same thing will happen to the Yanks in fenway or Angel Stadium for sure. That's the way baseball works...you get one BUT you get a call taken away as well.

Teix is amazing! The Yanks are a much better team for that signing, without him they wouldn't be where they are now........

Bruno- I am putting together a chart of salary and success of a team, trying to make a correlction between the two, going bakc to 1990, we will see how it turns out.

Here's the problem I have. Money always has an impact on the game, as Bruno has said. It makes a team competitive and gives them the resources to go out and get the biggest and best free agents. Just look at who the Yankees signed this offseason. They got the top 3 free agents. Where would this team be without Tex, CC, and even Burnett?

Now money doesnt yield or guarentee success. Go look at the Mets for that example. Injuries and poor use of money cna play a hugeeee factor. But haing that extra money gives you an edge, theres no denying that.

The issue I have is the ignorance of fans, thinking money doesnt make a difference. With the money and talent the Yankees bought, they should win a world series, they are built to win it right away. Teams who dont have the money have to take years and years to develop young guys and build their team up. Going with that, I think a team should spend as much as they can afford. There are so many teams that pocket money and refuse to put it into their team. I dont agree with that.

Problem is, some teams in certain areas really dont have the ability to spend the money, which is why there is revenue sharing and luxury tax. But then again, teams arent even putting that money towards their team.


As for Igawa, you are correct. When someone goes does, or just completely blows, the Yankees can go out and get another amazing guys. What team really has the luxury to do that? Not many.

Its no coincidence that the 5 of the 8 teams in the playoffs have a salary over 100 million. And that number would have been 6 had the Tigers made it into the playoffs.

woa, I really didnt edit my typos.. It should say "when someone goes down"

Only problem with the money argument is like the Twins, Jays, Reds, and Royals have wealthier ownership than the Yankees.

It's hard for me to feel bad for team's that have the money and simply choose not to spend it.

Different sport, but I'll use Mark Cuban with the Dallas Mavericks in basketball. He's a billionaire that bought a team that was basically basketball's version of the Pirates. A total joke.

He spent money and changed the culture of that team. Granted he hasn't won a title, but he makes the playoffs every year and fans in the area are interested in the team.

I wish my old computer didn't crash. I actually did a term paper while in college on revenue sharing.

I think money does definitely help, but there are teams that have the money and could potentially have great teams if they simply spent money.

Nice shirt Christina. Get me one!!

I sent a gift basket to Phil Cuzzi! Him and Jeffrey Maier should get monuments in Monument Park!!!!

Like honestly the Twins are sorta like Bill Gates (or some other really rich person) buying a team in some small market area. Then, not spending and saying well we're small market. We can't afford to spend.

It doesn't work when you have the money. I'm convinced that if the Pirates kept the players and actually spent fans would show up to that ballpark. Pittsburgh is one of the great sports towns in the country and they have one of if not the nicest stadium in baseball.

Same can be said with other teams like the Royals. Great baseball town and those fans would show up if the team spent.

On the other hand, Yankee Stadium would be half empty if the ownership got cheap, pocketed money and let all their players go when they hit free agency.

I don't like Swisher. But that is a nice shirt.

And I'm looking forward to your post about money's correlation with success.