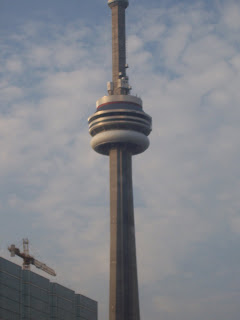 Since the Yankees are back in Toronto (my favorite city to visit of all time), I figured now would be best to recount the road trip I went on this past August to see the Yankees play. It was quite the trip. It took a good 6 hours to drive out there, and were lucky to not hit too much traffic. I always find the QEW an interesting drive. For one, the whole kilometer thing always throws me off. 100km/h is entirely way too slow to be driving, so for me its better to just look at it as its reading 100mph. So when I am hitting 80, I dont feel as if I am really speeding (I know, good try)

I have to say, Toronto is by far the cleanest city out there. I have been to Yankee Stadium in the Bronx, and while theres nothing like the Stadium, I feel the need to soak my entire body 25 times after riding on the subway. In Canada, the subways are so clean and the people are extremely friendly. Walking the streets are serene and there are some amazing shops to be seen down near Bloor Street.

So, enough of me drooling over Canada and onto baseball. I went to all three games and I have to say, I was quite surprised to see such a large number of empty seats. In the summer, the Jays generally tend to draw a decent amount of fans when the Yankees come to town. That was not the case this roadtrip. It is unfortunate that the interest in baseball has dwindled so much in Canada. The strike in 1994 really did damage to this club, and I don't think they will ever see those type of numbers again until the Jays ultimately reach the top.

I dont know if anyone has ever been to the Rogers Centre, but there are a few things down there that seem to never change; regardless of how annoying they are. For one, there is this distinct character that is located outside of gate 4? (i think). He sells Blue Jays Merchandise and I really think he is the most annoying person in the entire world. As I am sitting there waiting for the gates to open, he is outside screaming "Get you Blue Jays Hat, Their Going Fast". Now, this may not sound annoying, but you have to take the voice that this man has into account and also the mere fact that he says it over and over and over again for the entire time you are in line. It is one of those things that you just have to experience for yourself. And for all the years I have been going, this man has been there. There is no escaping him.

Also, there is my buddy Andrew. Andrew is known by every major league player in all of baseball that has visited the Jays. Ask anyone. He's a very nice kid, but very loud. And the one thing that I am envious of him is that Jeter threw him his bat during batting practice. That's the only thing I have asked for was a major league black bat. Not anyone specific; I just really want a Louisville Slugger. Well Andrew got one- yes, im jealous.

It just so happened that when I was down in Toronto, the Red Sox also made their way into town the same day. That was very interesting. I did have the pleasure of meeting a handful of players and receiving some autographs, which was very cool. The one disappointment for this trip was the fact I wasn't able to see Mr. Leiter, whom I heard was there announcing the game. I did see his partner in crime, Michael Kay, whom I think is a riot. I have met Michael in the past, and he is extremely nice and fun to talk to. I wonder how he feels about younger girls? lol

Anyhow, the stories are endless. But to sum up my experience, Johnny Damon is probably by far the nicest baseball player out there. I would place Abreu also up there with Damon. Mussina- not so nice. I said hello to Peteabe, and Jerry the security man and I are tight (ok not really, but his friends are cool). I have to say, nothing against people in Toronto, but they cant really hold much of a baseball conversation. Perhaps I just ran into the wrong crowd of people during my 3 day stay, but I think I had more knowledge about the Jays then their own fans even had. Spring training is definitely the place to go if you want to meet other fans that are into the baseball and know their stuff (the Bronx too obviously). 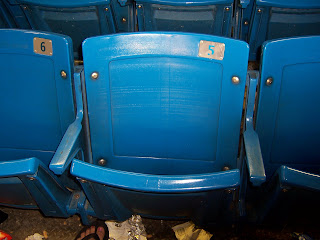 My seat for the final game. 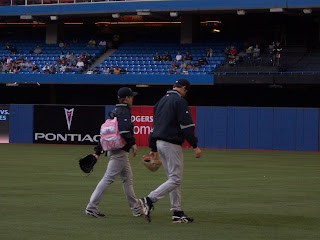 Rookies get the pink backpack. They played the Dora Explorer song while the guys walked to the pen. 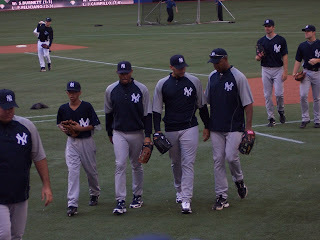 Mariano's son was the bat boy for all 3 games.
Posted by Al Leiter's Bullpen Catcher at 12:55 AM

This is the best blog ever! I love you!

That wasn't awkward at all.

Anyway, care to swap links? If so, email us at respectjetersgangster AT gmail.com!

Your blog's name caught my attention. I like the idea behind it. I like Al Leiter if only for the role he played in getting the Yankees to the playoffs in 2005. That first game he pitched against Boston was clutch. Here's our site: