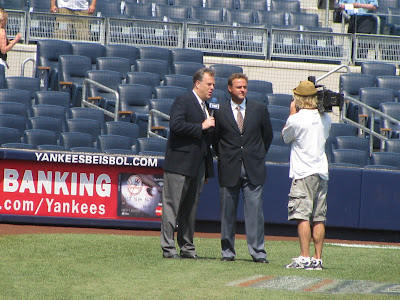 Back from the game yesterday in which the Yankees ended their 9 game winning streak, losing to the A's by a score of 6-4. It was a perfect day for baseball which left me with another lovely sunburn (not too bad thing time though). I have to say I was quite disappointed to hear that batting practice was cancelled. I know I shouldn't been shocked, as they typically cancel BP when they are playing a day game after a night game, but I was hoping that for some reason it was be on for Saturday. It was worth getting there 3 hours early though as I saw this lady I met in Tampa in March on the scoreboard and was able to catch up with her for a few minutes. I know I have said it before, but you seriously meet the best fans when you go to spring training.

Aside from that, I learned a few things yesterday that I figured would be cool to share.
Nick Swisher: Save a Horse, Ride a Cowboy
Mark Teixiera: I Want to Rock
Alex Rodriguez: Jay-Z: Public Service Announcement
Melky Cabrera: I Know You Want Me (Calle Ocho)

All in all, a good game. That is probably the last game I will be seeing at the stadium as the Yankees have priced me out. It was a fun time all around though, despite them losing to the dreadful A's. Can't win them all, folks! 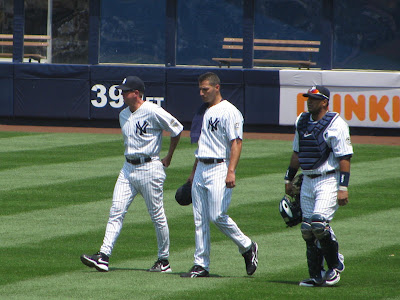 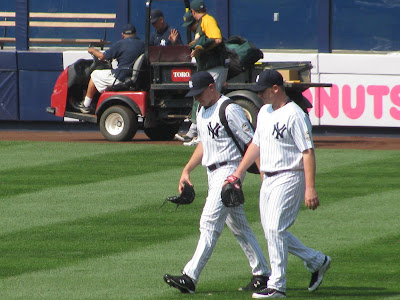 It was a fun game despite the loss. This team doesn’t quit. Aceves who has been great all season was unable to get that 3rd out. Losses happen, but overall the Yankees have been playing well.

The weather was great yesterday and it was a good day to at Yankee Stadium.

You are right about the prices. They are crazy. I can only imagine what the playoff prices will be like, but I’ll be crazy enough to pay…just not sure where.

Sounds like a great time Christina despite the loss. I guess I won't blame you for the loss, LOL.

Sounds like you and Kyle had fun. I know if you were at the game by yourself you would have told those 2 guys behind you off, LOL.

Bleacher creatures are great and it's great Swisher has become one of their favorites and salutes them.

I agree about security, not just at Yankee Stadium but everywhere.

I heard you saw Mike Francesa on the way home?

Yes, I did see Mike Francesa on the way home!! It was insane he just happened to be driving to Saratoga the same time I was driving home!

As for the Al Leiter fan club, I am sure there must be one out there. I cant be the only person who enjoyed watching him pitch.

I have some more pictures I will post later. I got a few shots of the inside of the old stadium. It is so depressing

And you are correct. Had Kyle not been with me, I would have said something. I tend to be more voal when I am by myself for some reason! I guess I dont want people I know to think I am insane! He probably knows that already by now though.

You should have said something to them. You don't need to be not as vocal just b/c I'm there. Anyway it was a fun game. Hopefully the Yankees do their part and we can see playoff baseball this year too.

Great pictures so far. Your camera has a great zoom.

As much as I hate A-Roid, and his douchebaggery, I must admit that Public Service Announcement by Jay-Z is a good choice. "Allow me to to reintroduce myself, my name is Hov..."

The song that Melky has is quite catchy too. The first time I heard it, i was like what a ridiculous song. Now everytime I hear it i find myself singing along to the song.

It was funny too hearing Swish come out to Save Horse Ride a Cowboy.

Where did you sit?

How much was parking?

I'm trying to score a game before school returns.

Chris, you're right about the Melky tune. I freaking hate it, but it's catchy as hell. I may or not be singing it right now.

Jenny- I sat in section 109. I got a good deal on stubhub. I would recommend checking there for tickets. As for parking, it is 19 dollars to park. If you go I would suggest paying for it beforehand or using a credit card. The lines are lone when you wait til after the game and pay with cash.

Eye: hahah I am listening to the song too right now. How sad is that. We are both GUILTYYYYYY!