The more I hear and read about Roy Halladay, the more I find myself getting annoyed at the people who for some reason find it impossible to spell or pronounce the man's name correctly. I know this sounds silly but it is driving my crazy. Matt HOLLiday is the guy who plays on the A's while Roy HALLaday plays for the Jays. The letter A makes an AHHHH sound people. And to the 12 people who spell it Halliday, just don't talk about him if you cant spell it. Its not like he has a name like Mientkiewicz. Oh well, enough with me being anal.

Last night, Halladay had another stellar outing for the Jays, pitching his 4th complete game of the season in which he gave up 6 hits and only 1 earned run. Crazy that it was his first win since June 7th.

It's too bad the Jays have fallen out of it so fast. There are in 4th place in the AL East and are 10 games behind the Boston Red Sox. While they aren't technically out of it yet, the chance of coming back at this point in the year with the number of injuries they still have to their pitching staff is pretty much slim to none. They would probably have a better chance if they were move out of the American League into the National League East.

Anyhow, here are a few pictures of the bat I got at the AAA Scranton game. It is my most prized baseball artifact as I have been trying to get a black Louisville slugger for soo long! Thanks to Shelley, truly a good man! 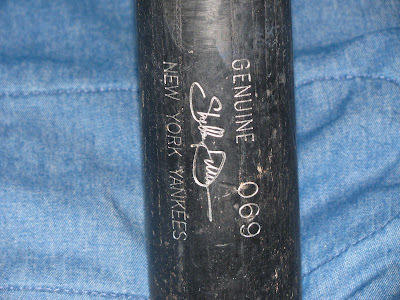 Also, good luck with that HW.

The Jays are idiots if they trade Halladay.

Nice bat. Put it on ebay and you could get a lot of dough!!!

Someone on WFAN last night called and said trade Shelley.

Francesa is a dick, pure and simple. Did you hear him with Heyman today on FAN?The Jays are not in financial trouble. Rogers owns the radio station they play on , the cable station they play on ,the cable provider the team play on , the stadium AND made a 1.1 billion dollar profit Cdn last year. THEY CAN AFFORD TO PAY HALLADAY BEYOND NEXT YEAR! The Mets lost 700 million in that Madoff scam, who is on poverty row now? Mike Francesa doesn't do his homework, BAD JOB!

Mike has it in his thick head that Doc would go to the Mets. Who has a better record , the Jays or the Mets? Mike harped about next year when the Mets are healthy....ynh? when have the Mets won anything? 1986? They've only appeared twice in the playoffs in the twenty Os.Mike is insane. The Mets can't pay for Halladay and why would Doc go to a situation where he's not gonna win this year?

I listened to him today, and he truly is an idiot. First off, why would Halladay want to go to the stinky Mets? THis is also coming from the same guy woh think Bronson Arroyo is God's great gifts and the best pitcher is the major leagues.

He killed me thoguh when he had Marty Appel on his show today and was like well I didnt read the book, I skimmed through it, you know I read a little, but skimmed through most... Real nice Mike. Guy comes on your show, you dont have to make it seem like his book wasnt that interesting. If you didnt read it, then dont say anything.

How digya score the Shelly bat?