Well 100 dollars later, the PC is finally fixed. So freaking amazing, though I am not thrilled with HP and their technical support. Between the 6 hours of their nonsense and being hit on by a 27 year old tech guy from HP named Eric from from the Philippines, I am just glad that the thing is alive and working.
So this week baseball has been pretty monotonous and filled the Roy Halladay trade talks, which are becoming quite tedious and annoying. Not sure what more I have to add to the debate except the Jays better make out with some amazing guys if this deal is done. The rebuilding stage will be hard for Jays fans but hopefully it will head them towards the right directions for the organization. I think keeping the young guys healthy should be a big thing for them to work on for the coming years. They have built up decent prospects but too many of them seem to be heading to the DL (I know injuries happen, but cant you say they have had way too many there the past few years that raise some sort of concern?).
Aside from that, I went to the minor league game on Sunday. Since the AAA Yankees field is a mess, they moved their game against the AAA Mets to Syracuse, which was actually a pretty good game. Sergio Mitre pitched fantastic and looks to have earned his way to being the number 5 starter. Shelley Duncan also gave me his baseball bat which was something I was beyond thrilled about. Anyone who knows me knows the obsession I had in getting a black Louisville slugger, which was also the model that Duncan uses in AAA. 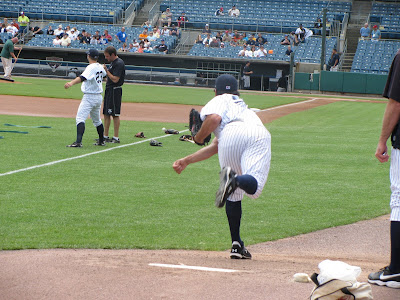 Ivan Nova throwing a side session before the game 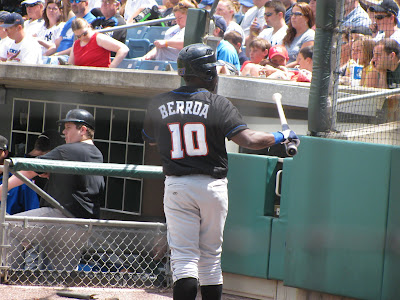 Angel Berroa: Back and better than ever 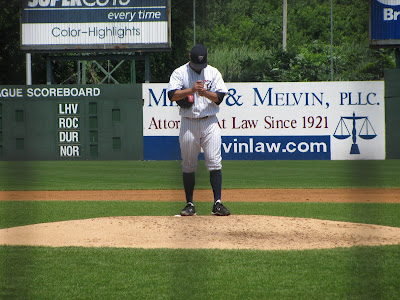 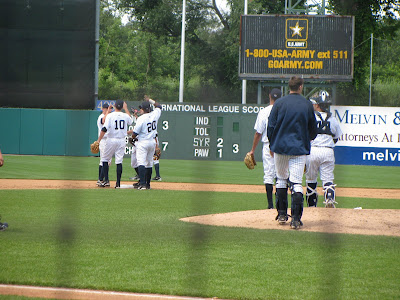 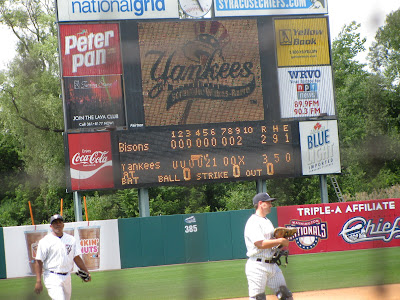 Glad that the computer is fixed!

According to Gammons on ESPN radio earlier today, there's no chance the Yankees could get Halladay. His words not mine... "No one wants Montero since he's going to be a DH in a few years."

He believes that Boston could make a trade, but they view it basically as an unnecessary luxury. He believed that the Phillies are the favorite.

Also, I'm glad to hear that you had a great experience at the AAA Yankees game.

What's funny is that Boston has more of the position players Toronto wants. I do think that there would be enormous dissension among Jays fans if that happened(Doc goes to the REd Sox).It's hysterical to listen to NYC talk radio and hear the hosts talk about how great a Joba/Montero? Ajax package is and that the Yanks can take on Wells contract etc so on. The Yankees spent 200 mill before the luxury tax, how much is enough? The Red Sox have better prospects and of those two teams that could really make it happen. Anyway, I don't want to see Doc go anywhere , so there!

Glad the computer is fixed too.

You are a great photographer!

Bruno- I agree about him staying put. What are the chances though that he goes to the Phillies?

Thank goodness, you were getting grumpy!

It will definitely be an interesting few weeks then for the Jays.

I love the fact that your pets comment on your blog.

Yeah, I either have the most intellectual pets or some interesting people commenting on my blog. I think im going to go with the former.