I have been slacking on the blog, mostly because I have been sick and busy with school. Today would have been a great day to head to the ballpark, however it is too late at this point to make the journey down to the Bronx. Some things to note around the leagues:
I have been going through some old pictures on my computer. Can anyone guess who this former Yankee is? 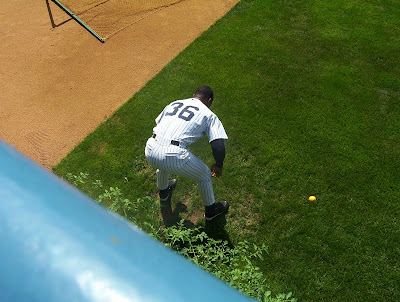 Not Latroy. This guy was here a few years before Hawkins.

Someone beat me to it, but it's Gordon. Good post.

Tough loss for the Yankees today. I thought we lost it when Coke came in. Rivera wasn't good but I trust him with 2 outs more than anyone else in the pen. I'd take our chances that we can score at least 2 in the 9th.

It's good to see that the teammates get along.

Phil Choke? Tampa 's demise was greatly overhyped. Bad sign for the Yanks that Tampa has beat them at home everytime so far as well as Boston. This is something the Yankee brass must be worried about......

Correct! It is Gordon

As for Phil Choke, Girardi was just asking to lose the game today. Why would he bring coke into that situation, unless he had already conceeded the game over to Tampa. The bullpen is a mess.

Yes youre right. Its Mike Mussina. Was it the cleats that gave it away?