Greg Clary of The Journal-News wrote an article in today's paper about an autograph session that took place at the Greentree Country Club in New Rochelle, New York. Those in attendance included the likes of Joe Girardi, Joba Chamberlain, David Cone, Don Larsen, and Alex Rodriguez.

The cost of receiving an autograph at this event ranged from $250 to $475 a PIECE. The best part of the article was how the money collected was not raised to go to a charity. In Albany, they have an annual event in January that brings together a player on the Yankees and also a few players on the Giants as a way to raise money for The Center for Disability Services. This is a great organization that helps out and covers the costs of services that are needed for children and adults who are suffering from disabilities and chronic medical conditions. Not only do they do great work for the Capital Region, but they also serve people across the US. Right now the governor is trying to cut 2.5 million dollars in state aid that they were supposed to receive, which really is going to hurt this organization.

The point I am trying to make is that it's unbelievable to read that these players making millions of dollars (along with the man from Steiner Sports) are collecting nearly $500 from fans just for the signing of one autograph. It's one thing if the money is going towards a good cause, but for them to pocket this money is just amazing to me. An organization such as the Center for Disability could really benefit from a thing like this. Of course, there is always that possibility that some of the guys actually gave their earnings to a charity- I almost want to hope that is the case. But to be honest, you really never know with these players. I guess when you look at it, it's more amazing that someone would shell out so much money to have a 4 second meeting with A-Rod and have him autograph a ball.

Here's a hint: go to a baseball game and try your luck at getting something signed for free. I have autographs from A-Rod, Jeter, Damon, Teixiera, etc..., which were all attained from meeting the players and were at no cost. The only autograph I ever paid for was the Brian Bruney autograph I got last year for a kid I tutor, and it was for a cost of 20 dollars; all of which went to support the Center for Disability Services in Albany. 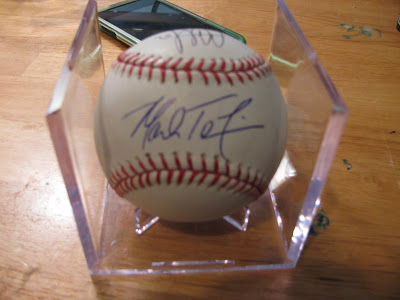 Good post. Personally I'd rather meet the person at a game or whatever and get the autograph. Rather than spending to buy an autograph. The story behind getting the autograph is something you always remember.

It's crazy that people will spend so much, but then again lots of people spend insane money on stuff from Steiner Sports. I mean it's their money. They can spend it as they like. Athletes can charge whatever and people can choose whether to buy or not. It's just that I personally wouldn't spend all that money on an autograph.

Could the proceeds go to charity? Sure. But if a company like Steiner Sports can make a hefty profit by selling players autographs, who are you to tell them they shouldn't? Nobody is ripping money from your wallet and forcing you to make any purchases.

I agree Spencer which is why I said my biggest thing was the fact people were actually paying that much.

Like I mentioned before, "It would have made more sense if the money went to charity, but I guess if people are willing to pay that much, then you can’t fault them for taking advantage of that."

The minute people refuse to pay the money is when they realize that they can't set such a high price. Its like that with anything in the world. But you always have people out there that will unfortunately.

My point was just that there are so many other ways that money could have been used to help people. Would you have donated the money? Maybe not. But if I am Arod, I would feel like a jerk taking 500 dollars for 1 autograph I signed. Hopefully it was legible.

It seems to me that over the last 20-30 years the entire idea of what an autograph is supposed to be has gotten turned on its head.

Do you have an issue with the prices charged, the players profiting or the players being charitable?

If professional athletes being charitable is the concern, does it matter more that they are or whether what they give comes from an autograph signing or their paycheck?

The autograph signing is about interaction and the experience. Steiner's website has signed memoribilia from most players on the Yankees. A Derek Jeter signed World Series insignia baseball is available on the website for more than $475. A click of a mouse and wait for UPS. Similiar product, different delivery method.

Much ado about nothing in my opinion. Someone has it, someone wants it, the market will bear for how much.

Anon-
You make a good point. I don't buy autographs online so I didnt realize Steiner was charging that much for one online. I guess it shouldn't shock me with that guy. But then again, he wouldn't have a business if the fans didnt pay him, so that shows you who the fools are.

With that, it still doesn't make it right for them to charge that much money. And charity was only mentioned because of the fact I see these guys selfishly taking part in these types of events, yet this charity here in Albany has to beg Yankees to come here.

At least Shelley Duncan and Brian Bruney stood up for some good. A-Rod showing up for this type of event would generate so much money for so many places that need it.

But its his choice, respectively so.

This is the same way it's been since Mickey Mantle.

These guys hardly sign at the ballpark anymore--and it's tougher than ever to get down close enough to have them sign anything, at least at Yankee Stadium. (How in the world did you manage to get the free ones you got??) If it's not common at the ballpark, some fans will go to extremes, either shelling out lots of money or spending lots of time to get an autograph they want. If only the players were a bit more accessible at the park...