Tampa- The Place to Be in Februrary and March 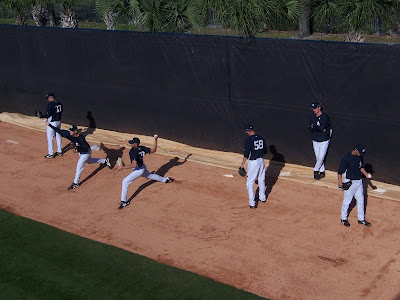 Here are some of the pitchers in Tampa. I think it is from my trip in 2006. 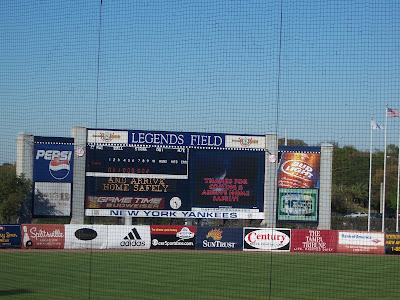 It's that time of the year again. Today is the official start of spring training in which the pitchers and catchers are required to show up at the beautiful complex in Tampa, Florida. It has been a long off season and it is at this point that I begin thinking of reasons why I must get to Florida. This will be my 6th year coming down to Tampa for spring training and I am more excited then ever. 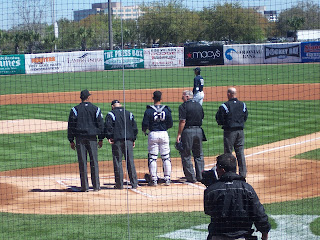 There is a trick to that trade that you need to know when heading down to Tampa. I have visited Tampa in February and March and the atmosphere is completely different, depending on when you for. First and foremost, there aren't generally games the team plays in Feb. This may be different this year because of the World Baseball Classic. The practices are free to the public. That is the positive aspect in going to training in the month of February. You can enter the field free of charge and watch the players in any seat that you would like. The downfall is that the practices are short and the players are just working on certain drills

When you go to Tampa in March, you are able to watch a lot more baseball. The players generally come out to the fields around 10ish for a game that starts at 1pm. I generally get to the field about 5 hours before game time. I enjoy meeting other Yankee fans and there is generally a lot of fans waiting at the complex, so it can be hard to find a spot around the fences. The only thing that I cant stand is that there is a security guard at every level of the field. If you do not have tickets for that seat, then you can not go down and watch the players and get autographs. There is also a few security guards that take their job entirely too seriously and they tend to walk around yelling at children while riding on that big scooter thing that has one large wheel (not sure what its called)


Legends Field (or GS Field) consists of three field. You cant entire the main field until 1.5 or 2 hours before game time. Generally, most of the players practice on the two fields that surround the main field. If your going, and you want autographs, try your best to place yourself behind the fence where there are little openings. This is where you can hand the players the things that you want them to sign. If you aren't around there, you will have to throw them the objects. There are a lot of big guys around, and they will push and shove you until they can get their own autograph. I have been pushed and shoved more times then I can count.

The Yankees have a beautiful field and it is great to scout the talent of the young guys that they have around. This year will be different without the big stars. No A-Rod or Jeter, and also when you look at the other teams, many of their big stars will be going too. I am disappointed I wont be seeing Vernon Wells and Alex Rios from Toronto, but I guess it will give me the opportunity to check out the young and upcoming talent.

BTW- Does anyone know how I can get the pics to go at the end of my post? I have been trying everything, and I cant figure it out :(
Posted by Al Leiter's Bullpen Catcher at 11:21 AM

sorry to bother but i have moved my blog form Yankees guy my new link is http://yankeesmagazine.wordpress.com If you could update your blogroll that would be great. You are still near the top of mine and I look forword to more of your excellant material. Check out the new site your comments and Ideas are always welcomed