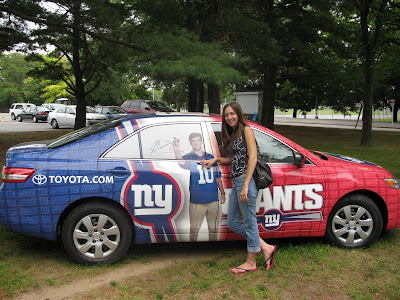 Went to Giants camp yesterday morning to see the guys practice. It wasn't very eventful but I have to admit I am starting to like the game of football (however it will never come close to the passion I have for baseball). I was even lucky to get a couple of autographs while down there, including Steve Smith (who I see every year helping out at the center for disabled telethon, good guy), Shaun O'hara, and Chris Snee. Are these good players? I have heard the names but I really am clueless when it comes to the Giants. 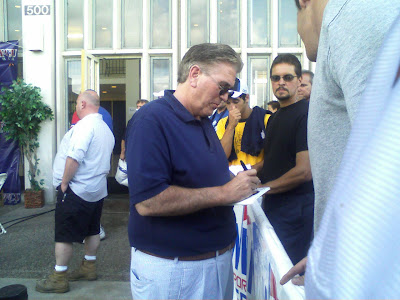 I also went down to see Mike Francesa as he was interviewing the players for his show on the YES Network. Most of the interviews for the show are prerecorded and taped in the morning as they can't really do much while the players are getting ready to take the field for practice. After taping the Manning and Coughlin segment, he came over for a few to talk to the people that were hanging out in the crowd. I was able to ask him a few questions pertaining to the Yankees and also other teams around baseball. Here is part of what I asked him:

Steve Smith- good possesion receiver, going to be a vital part of the giants this year.

O'Hara and Snee- both Pro Bowlers so yes... all good players.

That's awesome that you met those players.

O'Hara is from rutgers and he's a good player. Snee is a good player and he's married to the coach's daughter. Steve Smith is a decent Wide Receiver.

Interesting conversation with Francesa. His obsession with Arroyo is funny, but I guess he's consistent.

I agree with him on Cashman. Cashman has made a ton of bad moves over the years and has not really shown much skill at his job besides being able to outbid other teams for players. Eventually if you get enough players, some are bound to do well.

Very cool you went to Giants camp Christina. You should auction the signed hat off and use the proceeds to pay for grad school.

Did you get Mike's autograph? That is so cool you got to talk to him.

I never understood the pro-Cashman contingent...ever! He has the most money and brings in some crappy pitchers. I brought up trading Lilly for Weaver! Why trade a guy who could pitch in NY(which is difficult) for a guy who was pitching for a dog team? Dumb trade. And Mike liked that effing trade!

Arroyo was intrguing back in 2004, BUT now? He wanted 3 games taking away from his record. NO Mike, no way.He would be bombed as a Yankee in 2009.

Cash man? Give him 200 mill PLUS God knows how much for drafting andhe has it over every other GM. Not a very good one either......

Bruno- Id make a great GM. If the Yankees gave me all that money, I tell you I wouldnt have signed Jaret Wright or Randy Johnson. I could have built a team that won 4 more world series championships!