New Layout, not sure about it. 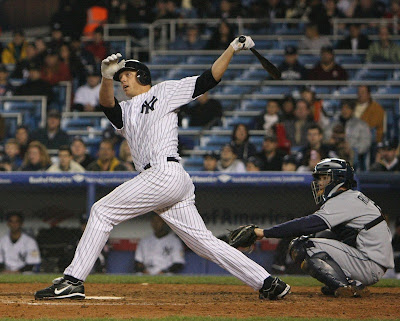 So I switched the layout around. I didn't like how the font was condensed to a tiny section, but I am not sure if I like the new layout either. The color scheme needs to be fixed. Any creative people out there?
So baseball-wise, the Yankees brought Shelley Duncan up to the majors since they were supposed to be facing 3 lefties for the Chicago series. Since the original starter was traded, the White Sox had to call up an emergency starter, who happened to be a righty, so Shelley wasn't needed. Since they acquired Jerry Harison Jr from the Reds yesterday, poor Shelley is being optioned down to make room for him on the roster. The poor guy. He finally earns his chance on the team, and they keep him up here for 1 day and don't even bother using him... At least he is on the 40-man roster now and hopefully will be back for September callups.
On another note, it will be cool for him if he makes it back to Scranton in time as the AAA Yankees are playing Pawtucket. Shelley's younger brother Chris was traded to the RedSox recently is starting for their AAA team. What a nice family reunion that will be. I am sure Shelley would rather be in Chicago though than back in the slumps of AAA.
As for the Jays, Halladay wasn't traded and Scott Rolen was. I was surprised to see that Rolen actually requested to be traded so that he could be closer to his family. Well, at least the Jays got a few guys out of the deal and dropped some salary. How good are these prospects/players that they acquired? Rolen has been a big part of the Jays offense this year and they are definitely going to miss his bat.
Regarding the Halladay nonsense, it looks silly in a sense that they didn't trade him. If they weren't sure, they shouldn't have made such a big debacle about it as all this did was disturb a guy who is very meticulous with his daily routine.
Posted by Al Leiter's Bullpen Catcher at 1:42 PM

Shelley's a fan favorite for a reason. Would love to see him get some PT anywhere (!) outside AAA. San Diego, even....

The new layout is different. I liked the old layout, but I'm sure I could get used to this new one.

It was disappointing to hear that Shelley is getting called back. He's like the Albert Pujols of AAA and he still doesn't get time in the majors.

I hope he gets called up in Sept at least.

I like both layouts. Christina problem with Halladay is that most fans recated with anger when they found out he was being traded. There was such a backlash that the Jays would have bit off their noses to spite their faces so to speak. also, JP is very unpopular with the fans. They don't want him to make thebiggest trade in Jays history BUT he did a decent job with the Rolen trade(who had become a fan favorite). we'll see about the two kid pitchers.....

Very funny, but the cat is on the couch. No access to a computer. Did you finish writing my 15 page paper? I expect a good grade on this assignment.

Hey Bruno, good game by the Jays tonight. Hopefully this injury to Downs isnt too bad...

Tell Mark Melancon to take me for a walk

You tell Melancon since your the one who is closer to him.

@ Christina ,Accardo and those two kid pitchers they got in the Rolen trade will pick up the slack. They'll be fine relief wise. Frasor can close too, so they have an embarrassment of riches relief wise.......

As for Doc, nobody met J.P.'s asking price; it's as simple as that. We're just glad he didn't settle.

me too, eye. I get to see the game tonight on TVm which is sweet cha ching.. Too bad I have this damn 15 page paper due tomorrow. Last one for this class though!!

I'll be at the game; Doc vs Pettitte. Should be a doozy.