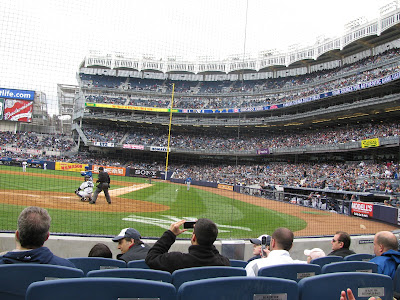 To make a long story short, I did end up going to the exhibition game at Yankee Stadium on Saturday. The assignment I had to do was postponed to the following day due to a death to a family friend. I figured this was a once in a lifetime thing (I am never going to be able to afford 2,600 so sit in these seats again) so I made the decision to just go for it instead of sitting at home wishing I had went.
The drive was uneventful. I made it to the stadium in a little under 2.5 hours, which is pretty good considering I wasn't going 90 the entire way. Parking at the stadium is always eventful but getting there early is always the way to go. The have this new system to paying for parking which is pretty stupid if you ask me. Just so you all know, the machine doesn't take Discover, which left me pretty annoyed. If you pay with cash, you have to pay at this pay station which can get quite crowded, depending on when you are p 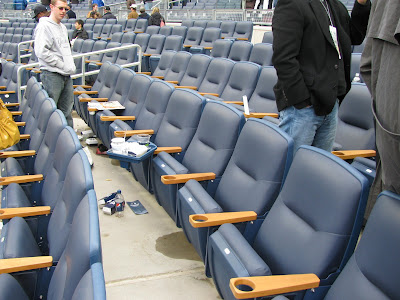 aying for the ticket.
As for my seats, they were beyond amazing. Here's a little background about the 2,600 seats. For one, they are padded and there is a tremendous amount of leg space. There are only about 7 or so rows in each of the sections, which are secluded from the rest of the stadium by means of a concrete wall. The is a separate entrance next to gate 4 that is specifically for those that have tickets in this section. Upon entering the gate, there are about 10 security guards, 3 of which are there to check your ticket. After making it through all those people, you make your way towards restaurant, to which you are greeted by more people that want to see your ticket. Words cant even describe how fancy this restaurant is, you would never know you were at a baseball game.
The food is all included (as it should for the money you pay for these seats) and you have the choice of eating in your seats or at the restaurant. I cant understand why someone would pay 2,600 dollars for a regular season game, have amazing seats, and end up sitting inside a restaurant, watching the game on a TV screen. I am pretty sure you can do the same thing at a bar or a different restaurant for a hell of a lot cheaper.
The last thing I have to mention is how amazing the bathrooms are. People seats in this suite are provided with their own bathrooms which make all others look like crap. There were 3 flat screen tv almost like embedded in their mirrors that were behind the sinks.The are these lights that are part of the floor, which really put my ADD into action. Its hard to really explain how gorgeous it was, I was amazed. The one thing I will add though is that a man clearly must have designed the layout of this because no one in their right mind would only put 4 stalls in one bathroom, especially for a women's bathroom. 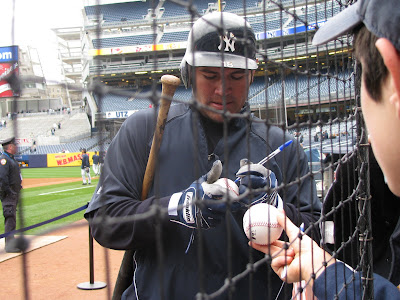 I am glad I ended up going, since I know I will never be able to sit this close to a game at Yankee Stadium ever again. I will say this though; from what I experienced, it is hard to believe that any real fan will be sitting in these seats. People who can afford to fork out 2,600 dollars for one game and need a restaurant downstairs clearly aren't attending the game to watch baseball. The section was empty for this game, and I am going to assume it is going to be quite empty for the regular season, whether it be from people not showing up or simply that they are sitting downstairs eating their fillet mignon in their 5 star restaurant. While I enjoyed the treatment of sitting down there, it left a sick taste in my mouth realizing how much this stadium has taken away from the average fan and has catered to the wealthy. And you cant say it hasnt, just look around and see how many seats are in the lower deck compared to those in the upper and more affordable seats (which are farther away from the field). 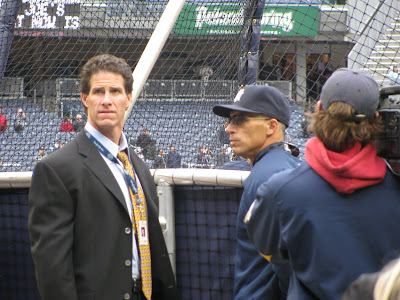 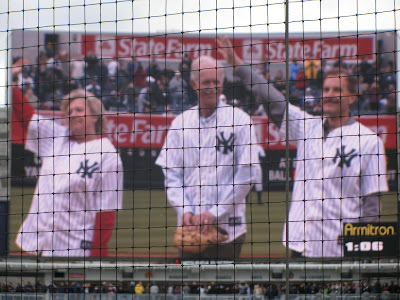 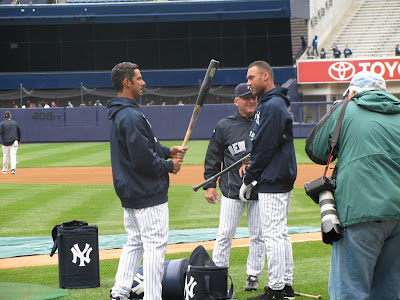 Posted by Al Leiter's Bullpen Catcher at 9:15 AM